Devil's food cake is a sinful, moist, airy and rich layered chocolate cake. There is no other way to describe than this.

Again I had something else on the list, however, when I realized that I could do yet another chocolate cake, I wasn’t giving up on the idea. This chocolate cake is considered to be on the same lines of yellow angel food cake, German chocolate cake, Red Velvet Cake. However, over the years, it has seen many variations.

One thing that is standard, though, is the fact that this has more chocolate than the regular chocolate cake, making it more dense, dark and rich. Another standard rule to be followed is that this cake is always layered and frosted with chocolate frosting.

Traditionally Devil’s Food Cake is made with baking chocolate than cocoa powder. Over the years, people have started using cocoa powder and including coffee as well. Since I was baking too many chocolate cakes, since the brownie episode, I wasn’t sure if this one will be sold.

I should not have worried at all. Given how much my kids love chocolate, this disappeared very quickly. I followed this recipe and included coffee because of the original note. The cake turned out so dense and very sinful.

I know when it comes to cake decoration, I can't trust my skills. I was trying to get the frosting appear as swirls. I know it looks very different finally! Here it was even dicier as I was handling a frosting that was thick, which when I slightly melted became little runnier. Then, of course, the cake was super soft that I was scared to lift it off. That's when I realized that baking a 8" cake should have been the perfect one.

I will surely be repeating this as the cake is a real winner. It tastes so soft, and sinful. My kids were over the moon after one bite!

Today is D for Devil's Food Cake from the United Sates

In the ABC Bake around the World series: 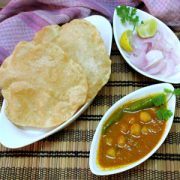