For today's traditional dishes, I had decided to make another version of Godhumai Halwa. Though I have already made this two times, I had short-listed two more versions. One with wheat flour and extracting milk from it. Another one a quick recipe in the pressure cooker. I think this recipe is from Chitra Vish of Indus Ladies. I wanted to make it as instructed but somehow missed doing that step and ended up making it differently.

This recipe calls for adding the ingredients to the pressure cooker and cooking for a whistle and cooking in sim for 10 mins. However by mistake, I mixed everything and had it on low flame, so by the time I had it for a whistle, the bottom got stuck. Since the flour is very light, it got cooked very fast.

Today being a Saturday I had the day off after such a long time. However, I had planned so many things that I was literally running around. I planned for three dishes for the morning and somehow managed to make them by the time I got down to making lunch. On top I also had to some shopping to be done, so had to go out. Gosh never realized it was so hot! It felt like Madras was literally burning. I was too exhausted and didn't want to venture out again.

How to make Wheat Halwa in Pressure Cooker

Take the flour in a pressure cooker along with sugar, ghee, and milk. Add the Kesar colour and cardamom powder.

Simmer the flame and mix well. Since the flour got cooked fast, I removed it to a thick bottom pan and continued cooking for 10 mins.

Continue cooking by adding ghee a teaspoon each time.

Your halwa is ready when the sides leave the pan.

Notes:
As per the original recipe, you use a tall vessel, so that on cooling, you can take it out and blend it to a smooth paste using a hand blender. When you are using this method, you will have to just add all the ingredients and cook for a whistle, then simmer for 10 mins.
Once the pressure falls, blend to a smooth paste using the hand blender. 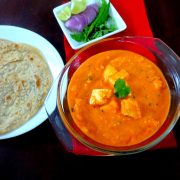