0 shares
With houseful of kids what should one plan ahead to keep them occupied and interested. My daughter and nephew are in that age group where they are so eager to declare being bored. It is left to the elders to find enough ways to get them interested. It is at such moment I remember my own childhood and wonder how well we kept ourselves so busy and occupied. Infact end of the day, I used to feel the day was not enough for us to do as we planned. Well plan is nothing, just get the maximum enjoyment of being on vacation.
But with kids these days, the most they can get themselves do is to watch movies. Especially at our home now, we got to listen to the commands of our twins. The current craze is the telugu movie Mahadeera. Like I said recently we have already watched the movie for some 30 -40 times, our guests were meted with the same fate, all three shows were screened this movie. So much so that they were even teasing each other saying they want to get ready soon so as not to miss out the matinee show.
I thought I was the lucky person to get all the movie dialogue memorized, well I now have my sister-in-laws for company! They are so much taken in with their little nephews that they didn't have heart (read courage) to say no to their wish to watch the same movie! The last 4 days has been only this movie that was running on since dawn till midnight.
So in the process, knowing we got to distract the kids with some activity, I planned for another session of making Bhel Puri at home, without the chutney. My first niece who is very much interested in cooking, already made a kind of bhel with poha and sev. She was much too interested with this type too. I got my daughter and her into the kitchen to make this. Since last time I served chocolate Milkshake with Bhel, my boys assumed that it will be served again.
They kept running around saying they wanted the Milk, Milk. I finally had to resort to making it with the Vanilla ice cream that I had, well it goes without saying that everybody got dunk! Then we went to have the mehendi done. My niece who is really very good at these mehendi designs got all ready. I bought two cones, hoping we will get to do this.

Peddu getting his hand done!, while Chinnu was pulling!
Everybody along with the boys sat down to get their hands adored with Mehendi.

First ones to have were Peddu and Chinnu. Peddu had the patience to keep on the mehendi for a while.

whereas Chinnu was most impatient and got it washed within minutes, even then it turned a beautiful orange on his sweet little hands.

Both of them were so excited being tattooed with Mehendi.

My niece did a beautiful work on Konda's.
This was all also done in anticipation of the birthday party celebrations!
The night ended with Chinnu spoiling his new shirt with mehendi, what else did I expect!Do share if you have engaged your kids in interesting ways!
« How to make Bhel Puri | Bhel Puri for Kids - Cooking with Kids!
Ideas on Healthy snacks for Kids » 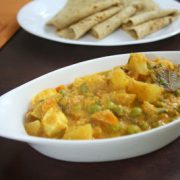