0 shares
Jump to Recipe Print Recipe
I am going to share some Low Carb Recipes. I was supposed to do Festival Dishes, however something came up and I couldn't do them. Not that my Low Carb Diet Dishes were done, I still went ahead and swapped myself.
Diet and I don't really do together. The only time I was on a diet was some couple of years back, when I went on a real hard diet and was so strict with myself that between some 4 months and 18 months I had lost nearly 17 kilos and then over the next many years, gained it back.
Even though I have always been 'healthy', I have never been this healthy! So during that period I had to force myself to do it. You could see the results and my experience that happened in the posts I shared. Infact it was very good, only I was feeling so down because I couldn't blog much and didn't have time for anything else.
That was mostly because I had to cook specially for myself, apart from regular cooking. Being a vegetarian is hard enough in a non vegetarian family. Having to cook even more specially, makes it so impossible.
On a regular basis, my food intake is bare minimum. However do you know the statement that one can actually gain weight by simply taking in oxygen? well come home I will show you.
Jokes apart, ever since I was on the diet, I have helped many friends with my diet plan. Even sort of got it into my lifestyle. However I haven't been able to keep at it with consistency.
I don't believe in dieting oneself to death. I believe in moderation in everything. I mostly don't like sweets, hardly ever eat ice creams and stopped chocolates long back. The only cause fo the weight gain has been lack of exercise. I have started that and hope to achieve something positive soon.
All said, this is a lifestyle change and nothing works on clicking a button!
So when I was requested to include No Carb Diet, I didn't actually look into it. I simply added it without reading about it. I later accepted that I was ignorant on it and on further discussion with my BM buddies, we decided having a No Carb Diet based on Indian Vegetarian Diet is next to impossible.
We decided to make it Low Carb Diet. Trust be, even that is so hard. I have been going crazy the last couple of days, trying out so many ideas and simply being pre occupied with this theme.
I am quite well versed with Diabetic Diet as I was researching for diabetic recipes for Daddy and I also have him to guide me when I have some doubts. However certain ingredients that are good for Diabetes are not suggested for Low Carb Diet.

For example, Chickpea is the most suggested ingredient for Diabetic, as it has low Glycemic Index. However the total Carb of Chickpea is high. In the same note, Mung bean or Moong dal is suggested for both the diets, though the Total carb is still high. I will have to cross check with my dietician. Though from what I know, she was suggesting exclusion of all grains from the diet for loosing weight. Chickpea and Mung Bean as good Carbs, that are helpful for weight reduction.
I also wanted to make sure I personally have only this for my dinner and check if I was feeling hungry or not. I have completed two dishes and successfully don't feel hungry and since it has interesting ingredients, it was fun creating these.
I know I can talk a mile, never realized I actually did that! Anyway I don't want to repeat myself on what a Low Carb Diet is. The diet specifies that we should not include any crab in our diet. You can say you are doing a low carb diet if your total carbohydrate intake for the day doesn't exceed 130 grams. Checking this is extremely tough and frustrating.
For the day one, I made a Vegetable Medley. I simply checked on the individual carb count and made sure it was within the limits.
In low carb diet, one can take butter, which is funny. Here I was trying to shed some weight and I am told I can consume butter. So though I am allowed, I made sure I was not creating more trouble for myself, by adding only a tsp of butter for this dish. The spices and the cooking method made sure the dish was tasty!
Check out the Diabetic Diet Menu if you are interested to see how the diet is created. My Diet Plan that I followed was also tracked for a while.

How to prepare the Vegetable Medley

Finely chop the beans, carrots. Microwave for 5 mins along with fresh peas.

Cube the paneer and in a non stick pan heat the butter and toss the paneer, sprinkle the salt, red chili powder. Once it gets roasted well, remove.

Now in the same pan, add all the individually cooked vegetables and paneer, sprinkle pepper and do a quick toss.

You can pair it with spiced buttermilk for more complete meal.

Since I used a non stick pan, the same tsp of butter was used for the entire dish. Adjust the spice and salt once you mix everything together.

Though sweet corn and chickpea is not recommended for Low Carb Diet, the amount I added to the whole was not much.

Also as per my dietician, I was advised to eat all lentils for snack time. So I feel chickpea is good still, considering it is a good carb.

The paneer added lot of flavour to the entire dish. And eating that bowl you see on the table, makes you real full and happy! Infact I gave this for everybody at home. Amma loved it and Konda wanted more, saying Paneer was less for her.

So this was really a hit and something I could make again!

How to prepare the Vegetable Medley

Infact, I gave this for everybody at home. Amma loved it and Konda wanted more, saying Paneer was less for her. So, this was really a hit and something I could make again!
Tried this recipe?Mention @spicingyourlife_ or tag #spicingyourlife_!
« Manapparai Murukku ~ Tamil Nadu Special | How to Make Manapparai Murukku | Indian Cooking Challenge - June
Roasted Cauliflower, Capsicum with Moong Dal Patties ~ Low Carb Indian Vegetarian Recipe » 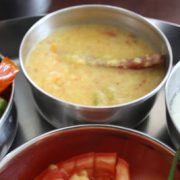