We are starting the fourth week under Mega BM themed on Baking. For this week, I will be showcasing bakes, mostly all cakes, muffins made using Egg Substitutes. Since this is a vegetarian blog with no eggs used in any of the bakes, it's not a new topic. However I just wanted to highlight each one that I have been using over the years.

I wrote about the different Egg Substitutes that are available, including what I have been using, with some new ones that have been tried this edition. For today I have baked using Curds. In the pre mixed cake jar, all we have to add was curds and butter.

I have always used curds in my bakes to replace eggs. When we are replacing curds, if we do not aerate it properly, there is a chance that the final bake will end up being dense. So beat the curds well and aerate with Baking powder. Since this was a premix I had to simply mix in and make as muffins. Else this requires creaming and baking. The cakes will have a spring to the final baked cake. I only bake for my kids, so most of my cakes end up being chocolates and single serving as cupcake or muffin. My frostings are mostly Ganache and never with buttercream. Konda has been asking for a buttercream frosting and I almost thought I might do that during this edition. I again gave up on that.

Baking with 1 cup flour is easy as you get immediate snack and you can try different options. So enjoy your Eggless baking with Curds for day 17. Ingredients Needed
All purpose flour 1 cup
Sugar - 3/4
Plain Yogurt / Curds - 1/2 cup
Unsalted Butter, melted -  1/4 cup
Milk - 1/4 cup
Cocoa powder - 2 tbsp
Baking powder - 1/2 tsp
A pinch of salt
Handful Choco Chips for the batter
Chocolate Chips for topping
How to make the Muffins
Since I was using a pre mix, I added melted butter and beaten curds.
Else you can cream the sugar and butter for making more of a cupcake. I simply mixed in everything that was in the Jar, along with melted butter and curds.
The batter wasn't loose, so added milk slowly to get a scoopable batter.
Pre heat the oven at 185 C, Line a mini muffin tray with liners. Using a smaller scooper, scoop into the dents.
First batch was baked at 185 C for 12 mins, then at 170 for 3 mins.
Second batch was backed at 185 C for 15 mins. Notes:
If you want to bake this as a cake, then creaming the sugar with butter, then adding beaten curds should give you a batter that can be transferred to a cake pan. 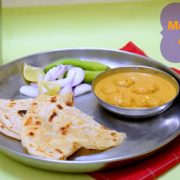