We are starting the BM#49 Edition first week today. I will be starting with some desserts that I had suggested being cooked from a list. You really won't believe the amount of time I spent on this list, trying to see what I can make that my nonsweet eating kids will eat.

Finally, I landed on the Indian list and again looked at Jalebi and Rabri. I had bought the ready mix, after eying the pretty Jalebi press. Trust me the packet has been lying in the pantry for a while, as I had got this for some previous editions. I couldn't make it then and now I was running out of time.

Seriously until I clicked and almost many days after it was completed, when I editing, did I realize that another component for this sweet was missing! Well, I was planning to make Jalebi Rabri. However since I had already completed the packet, there was no way I could get another dish done. If you must know, the other two desserts were being done in my mind for the 100th time, though in actuality it's far from being done.

So, friends, you can drool over the pictures again and check my Jalebi post for the homemade version of making Jalebi. For today, all I did was mix the packet, make the sugar syrup, have some deep fried love, and indulge in heaven! In fact, I took the whole lot to my friends, who welcomed me with wide arms for the way it tasted!

For the Sugar Syrup

Mix the powder with enough water to get a dropping batter. Transfer to the press. Heat a Kadai with oil.

When the oil is hot, press out the Jalebi Press directly over hot oil and swirl to circle as Jalebis.

When it comes up and done, flip to the other side.

Meanwhile, have sugar melted with water enough to cover. Cook for 10 mins.

When the Jalebis are fried, drop into the sugar syrup and ensure it gets coated well. 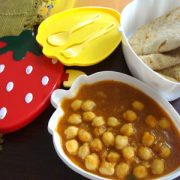