0shares
When it came to T, the choice was either Thalipeeth or Thepla. Though I have been reading about both these Indian Breads, only when I decided to make for the series that I really read through them.
Thalipeeth is a typical Maharashtrian dish made with a variety of flours along with vegetables. The flour is called as Thalipeeth bhajani, which is not very hard to make at home. Infact I have all the ingredients required for this all the time in my pantry. Only when I decided to make it, that evening wasn't really conducive to this dish. So the choice fell on Thepla from Gujarat.
Theplas are supposed to have longer shelf life and can be had at any time, even as a snack. Well, I was all for having it as our dinner without much fuss. Theplas can be made as plain or with a variety of greens, and vegetables. I had methi with me and realized that Methi Theplas was quite famous. So that's what I ended up making it.
With kids having their quarterly vacation, I am must more pressed to make dishes of their liking. Which naturally gets down to be chocolate recipes. So after a week, if all I can smell only chocolates, I can't be blamed!

The boys design their own games and things to occupy themselves, the latest fad is their chart caps. Peddu seems to have an inbuilt streak of creativity, which I flatter myself to think he inherited all from me..:) He paints and writes, makes handmade stuff that assumes a lot of different objects that fancies his thought. Whereas Chinnu is more of his sister's follower and does what she says and tells him to do. Konda is a leader with two willing followers and her brothers will do whatever she tells. I see this as an opportunity to get things done by the boys. If I want them to eat something they don't, I convince Konda to tell them. Somehow the moment she says, they are willing to at least try. Sometimes it doesn't work, however with most things it works. So I am happy.
The other day Peddu wrote a letter to his friend, designed an envelope, and wanted to post it. For that, he said he will want to become a postman. For a moment we got so wild, not because we wanted to belittle a postman's job, but we want to inculcate the thought of thinking big! I know most kids grow up with the thought of becoming a doctor or an Engineer. So it is confirmed that Konda wants to become a heart doctor, Chinnu a pal doctor (Dentist), and Peddu, either a strict police office, occasionally will be a postman to deliver his letters to his friends, apart from being a homemaker. We told him that to deliver his letters he need not become a postman, so he agreed he will use the courier service. Thank God for that!
So coming back to the recipe of the day, for T, it is Theplas Theplas | Methi Thepla
Ingredients Needed:
Wheat flour - 1 cup
Gramflour / Besan - 1/4 cup
Red chilli powder 1 tsp
Turmeric powder 1/4 tsp
Salt to taste
Asafoetida / Hing a pinch
Cumin seeds 1/2 tsp
curd 2 tbsp of
Ginger paste
Green chili paste
Oil - 2 tbsp
Oil for cooking / frying
How to make the Thepla
Wash and drain the methi leaves. Chop it roughly to ensure you have small pieces.
In a bowl, take all the ingredients and mix everything. Slowly add water to knead to a stiff dough. Cover with a lid and let it rest for 15 - 20 mins.
Divide into equal balls, dust and roll out as thin as possible. If you want even equal sized discs, use a lid and cut out discs.
Heat a griddle, grease with oil, cook the theplas on both sides.
Serve hot with pickle and curds.

Notes:
You can mix in any vegetables like bottle gourd, other green leaves, etc into this.
The prepared dough can be stored in a refrigerator for a couple of days, ensure it is stored in an airtight container. 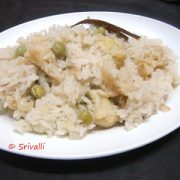