I have a typical South Indian Breakfast for today, Idli, Medu Vada with Hotel Style Sambar! I am going to take full advantage of my own rules and relax with just pictures of what we had for breakfast.

It was Idlis with Meddu Vada, Hotel Sambar and chutney, though it was made as well, it's missing in the picture. For a long time, hubby dear has been after me to replace the blog picture with new ones. I have even included that theme in the next BM.

I was surprised that though we make idlis every week, I never thought I should replace them. I am still yet to do it. The basic Idli post has a lot of details, tips, and discussions with readers. I have been planning to do a step by step post as well, which will be up soon.

So then I might come out with the new pictures. This post, however, is not about the recipe, rather the memories associated with this wonderful staple to all South Indian families.

Growing up, I have always professed dislike to this dish, simply to spite my brother. As an eight-year-old kid, I was bored to death for want of somebody to fight up. I came up with this brilliant idea to pick up a fight with my older brother, who is too sweet and calm for my own good.

He was and still is a person, who never raises his voice, unless and until trust me, is really really provoked to the core. And that happens very rarely too. All my growing up years, I tried my best to do it at every opportunity. If he likes a dish, I made it a point to dislike it, and made things tough for Amma. Plus somehow pick up a fight. To my dismay, it never used to happen.

So it was like this, he never touches Idlis, I love it. He likes Ven Pongal and I won't touch it. The list was quite long. For a long time, I never tasted Okra stir fry because he loved it. You are reading a person, who had such a dull as a dishwasher childhood, always with imagined fights with siblings. I envied my friends who fought with their siblings and lapped on their stories and wished I had the same.

Of course, I grew out of my childhood antics and accepted that I had to live with a brother who was too kind to believe. We miss him whenever we make his favourite dishes, which happens to be almost on an everyday basis. He still doesn't like Idlis much, though my SIL says he eats because his kids like it.

And my Chinnu has many of his food habits and Amma gushes each time she talks about Chinnu's likes and dislikes and how much he resembles his uncle. The scene is quite comical most times. While Konda, Peddu loves to eat Idlis, Chinnu will not even come close.

The same goes for anything to do with bread. He has not even tasted a bit of bread. While the first two loves pizzas, burgers, Chinnu will not even touch a barge! And on top demands that I make something special for him alone as others are having their favorite! That something special always happens to be Maggi.

I hope you enjoyed reading this as much as I enjoyed writing it. It's been a while since I rambled and never thought a simple dish like an Idli can get me on so much!

This day next week, Konda will be starting school. So it's only another week for us to be laid back and enjoying our summer holidays. We will be rushing out to begin a whole new year at school!

That reminds me of my own Summer vacations, how I used to begin each year with loads of Enid Blyton, Famous Five, Nancy Drew books, later to be replaced by Frederick Forsyth, Robin Cook, M&Bs, and more serious literary works. I tried my best to get Konda interested in the huge collection I have accumulated over years, she is unable to cross past Tinkle. Of course, I can read Tinkle even now, but just saying!

It's been a great fantastic two weeks of Blogging Marathon. And I am left with nostalgic thoughts of ending this session today. We will be beginning a new season of Blogging Marathon next week, which is set to be more exciting than before, if not more! 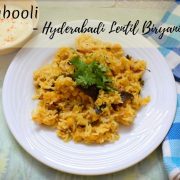