0 shares
Jump to Recipe Print Recipe
How does it feel to imagine something you have never experienced? I mostly end up thinking on those lines and always come up with a feeling of the sensation that happens in the mind and I have a vivid picture to accompany what I think. I have never been in a desert! And that's what I have thought of many times, how does it really feel, and the books that I happen to read during my childhood, have aided more to my imagination. The best has always been Tintin in the Land of Black Gold, where everybody keeps walking around the desert. I have read these books a countless number of times, so many times, that a part of my childhood stands frozen with memories associated with these books.
So when talking about deserts and the endless sands, I only think of the one desert state we have, Rajasthan. I have not visited this Rajasthan, though I have read so much about it and love the cuisine. I do include these in my regular cooking and don't realize that I haven't visited this place. When I had to decide on a bread, when I have almost made most of the bread that's made here, I thought I will really have to look around a lot.

However, my search ended much earlier than I thought when I read about Vikas Khanna's Khoba Roti. He talks about food is an art form and this intricate, beautifully designed bread will make you want to pack your bags and travel to Rajasthan. How true!
I was fixed on my Khoba Roti and wanted a subzi for it. When I visited Vaishali, she introduced me to her Rajasthan friend. Before we could even exchange pleasantries, we were shamelessly asking her to share her recipes. This happened across mehndi function, when intricate designs were being put on our hands, I was thinking of the Khoba bread. She was telling us that they know at least 40 different ways to make Potatoes and was telling us about tomato launji. With our hands being unavailable, Nandini thought we would be smart enough to record her recollecting the recipe. Vaishali's friends thought we were out of the world, maybe even thinking that we were nuts in their minds. However, we were beyond that.
It was really sad that Nandini's phone crashed and we lost the smart thing we thought of.
And without that, I had to resort to making a different Aloo Ki subzi that I had, which is from Rajasthan again, so enjoy.

How to make the Aloo Ki Subzi

Pressure cook or MW Aloo for 8 - 9 till fork soft. Peel and cube, keep it aside.
In a nonstick pan, heat oil, ghee, add minced onions, saute well.
Then add the whole spices, saute well. Next add tomato puree, cook well.
Add all the spices along with salt and cook on high, as you keep stirring.
Cover it with lid and make sure the tomatoes are cooked well.
Now add the cubed aloo, curds, and simmer till curds is blended well.
Add water and bring to boil. Now add the cream and simmer for 5 - 7 mins.
Finally, add finely chopped coriander leaves.
Serve with Khoba Roti

How to make Khoba Roti

In a mixing bowl, combine the flour, carom seeds, chilli flakes and salt with 2 tbsp of ghee. Mix very well and knead in enough water to make a soft pliable dough. Cover with a moist muslin and keep aside for 10 minutes.

After 10 minutes, divide the dough in half. Roll out each half into a thick roti of about 12 to 14-inch diameter.

Beginning from the centre and moving outwards, pinch the surface of the roti to make a design on the roti. Repeat for the second roti.

Heat a griddle over a low flame, place the roti design side up and cook over a gentle heat. Drizzle over the top and on sides with ghee. When one side is cooked golden, carefully turn the roti over and cook on the other side. Repeat for other roti.

The top design can be done directly on the tawa or on board. I felt making on the board was much better than on the hot tawa.

I strongly recommend sprinkling red chili flakes over the top, else it does tend to be thick plain roti. 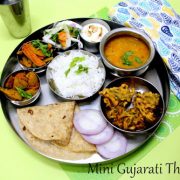