33 shares
Jump to Recipe Print Recipe
Nothing can beat Chocolate in my house. And that’s what happened! When for the seventh day, I selected Ghana, because I came across the famous West African Hot Chocolate. I knew it would be a hit, and yes naturally my kids enjoyed it to the last bit!
Though I came across quite few other recipes, most were almost the same and I kept to the original one I read. This recipe is again from Celnet, which seem to have been the site I ended up checking for countries I had hard time figuring out. The recipe listed is retold by a Ghanaina friend of the author, though there are so many variations as expected. The traditional Ghanaian Recipe is made from a blend of milk, dark chocolate, honey, vanilla, cinnamon and rum. So recipes skip rum as well.

When I was making it, Konda was helping me click the pictures for step by step, on seeing the cinnamon, she didn't want me to add, saying it will spoil the taste. I said it will not and moreover the traditional recipe calls for it, so there is no way I can skip that and still call it Ghanaian Recipe.
I said I will be removing the cinnamon before serving. So I was eager to know how she liked it. On drinking it, she said we could know the cinnamon taste, and as you go on, it’s no longer there and you have a great chocolaty kick settling in.

Before I could even think of chopping the dark chocolates to drop in, my helper was busy popping in chunks into her mouth. I had to literally stop her further, else nothing would have gone into it.
Then the boys were impatient because they saw something dark chocolaty thing happening and they won't want dinner as well. You should witness how it is, when I get a chocolate dish in front of my kids. They simply refuse everything else for a taste of chocolate. So it's only naturally I opt for chocolate dishes. 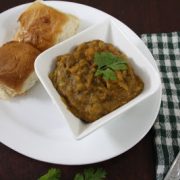