2shares
Learn to make this delicious English Fruit Fool dessert with your seasonal fruit, I made mine when Mangoes were in season and how sinful it was! For the fifth day under ABC Int’l, I have the famous fool from England! A fool is an English Dessert, traditionally made by folding pureed fruit into sweet custard. However the modern fool version of recipes, often skip the traditional custard and use whipped cream.
Foole original was made with gooseberry. Later there have been other fruits that are being used. And modern recipes include seasonal fruits including mangoes. This was the first country that I made and I wanted to make Mangoes as it was in the season. Every summer, during the season, I have been trying to make different dishes with Mangoes, apart from enjoying it as the fruit.

However this summer the days quickly passed before I could even think about making anything special. So I didn't want to miss out an not making a memory and decided nothing can beat this Fruit fool in it’s simplicity. Clicking a beautiful picture was altogether a different issue though.
While reading more on it, I came to know about Syllabub.  Syllabub is an English sweet dish described by the Oxford English Dictionary as "A drink or dish made of milk or cream, curdled by the admixture of wine, cider, or other acid, and often sweetened and flavoured.

The texture seem so similar and it was interesting to note so many different types of dessert! Since this was prepared way before I could think properly on my list of countries, I really ended in a big soup. We had a clause for X and W and I forfeited the luxury of making Wales! Anyway my hardship on landing on W is for another day.
I had also very keen on making Banoffee pie, but then can’t stuff with so many desserts!
For now, let’s take it cool and enjoy this delicious Mango Fruit Fool.

Notes:
Next time I will be making it with Custard and check out how it will taste. With cream it was so smooth and addictive. 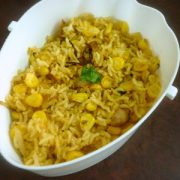