11 shares
Jump to Recipe Print Recipe
For the last day of stuffed dishes in BM#18, I wanted to make Paneer Kulchas. When I selected Kulchas to be made for Indian Cooking Challenge couple of months back, I selected three different stuffing and wanted to be sure I make all of them. So finally got around making this delicious kulchas with paneer stuffing. Konda love this so much, even though it's almost the same stuffing I make. Maybe it mattered with the outer layer and everything together.

If I remember right, Paneer Kulchas were the first ones I tried. When I ordered it in a restaurant, I was surprised to see those circle parathas being offered. It was so many years ago and a time I wouldn't order anything other than Naans. So it was quite a challenge that I was setting out to do. But in fact it turned out that there wasn't much of a difference between the way the chefs make Naans or Kulchas these days. The outer layer is the same and in most places they don't make stuffed Naans anyways. So you end up ordering what's called a kulcha.

When I was reading on the original ways of making Naans or Kulchas,
they say that originally Naans were made out of whole wheat flour and
baked in a tandoori oven, whereas Kulchas were rolled out with stuffing.
Of course the leavening agent being is different, the texture and taste
might vary a bit. But it all boils down to the same thing these days.
The
other day when we went to our club restaurant, the chef dropped in to
meet us at the table. We get those not on the menu dishes prepared for
us specially. Coming to think of it, I can't judge his age, however
looks like he has been cooking for a while as he is a master for many
dishes. So when he dropped in, hubby dear asked him for a special non
veg starter and I ended up asking for a paneer kulchas. When I got them,
well it tastes great, the stuffing had a mix of paneer and onions. One
half of it was paneer, the other half onions. Now sure how he made that,
anyway the bread was great. So come to think of it, I love Naans and
kulchas and I don't want to think further on how each one is made. In
this age, one doesn't really give lot of importance to these things. If
it's good to eat, they are just happy.

For the Kulchas outer layer

For the Paneer Stuffing

How to make the Outer layer for the Kulchas:

In a wide bowl, sift the flour with soda, baking powder, salt. Gradually mix in the curds, ghee. Rub well. Then slowly add the milk and knead to a soft dough. Cover with a a damp cloth and rest the dough for 30 minutes.
Beat down again, mix in a tsp of oil and cover again. Let it rest for 30 mins more.
Divide the dough into six to eight equal portions and form them into smooth balls.
For making the Stuffing:
Make Paneer and keep it ready. If you made it just then, you can crumble it, else grate it in a bowl.
Take the grated or crumbled paneer in a bowl, add the red chilli powder, chaat masala, roasted cumin powder and salt to taste. Mix well and make balls of equal portions and set aside.

Flatten a portion of dough, place a portion of the paneer mix in the centre and fold the edges over to form a ball.
Place the stuffed ball on a lightly floured surface and roll gently into a disc of four to five inch diameter.
Brush lightly with a little of oil, sprinkle some onion seeds on the surface and press with your palm.
Similarly make the remaining kulchas.
Place the kulchas on hot tawa, cook on both sides.
If you want to bake, place the rolled out kulchas on the greased baking tray and bake in a preheated oven for about six to eight minutes.
Brush the hot kulchas with oil and serve immediately. 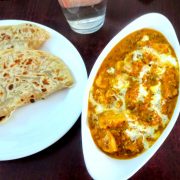