I had decided to make Indian Desserts. For those who do not know, we do not actually have something that can be strictly called dessert in Indian cuisine. Especially in the south Indian cuisines, desserts would refer to the many payasams and other sweets that are common. Other than the Pal Ice that I know of, I don't remember any other dish that can be classified as cold dishes.

When it comes to festival occasions, sweets are served as part of the meal. In fact, in a typical Andhra Thali, payasam is served first, where the sweet activate your digestive juices to get ready for the heavy food to follow. Of course one can always end the meal with a second helping of the sweet. After the meal is done, fruits are offered followed by beetal leaf/ Pan.

Growing up, I have always observed only a typical payasams or kesari or even a burfi only being offered as dessert. Only later with the western influence, we have started seeing Ice creams, cakes being offered as desserts. Even our own Kulfi or Falooda is not part of the South Indian Meal. Now you find so many changes done to a menu that one can no longer differentiate the different cuisines.

My father has never been keen on sweets, while Amma is very fond of sweets. So you can imagine it was always a tug of war happening at home when it comes to sweets being made at home on a regular basis. Even when she makes as Neivedyam, he strictly tells her not to give him or even worse ask her not to eat. He tells her to pack it off to others.
On the other hand, hubby dear loves to have a dessert after a meal, at least during weekends. I had got into a habit of making something or even have an ice cream box at home all the time. When I thought of this theme, I was thinking it would be really nice if we were to typically look out for dishes that will be a great dessert after a meal. It need not necessarily be a cold dessert. In fact, I even love a hot dessert after a meal.
Some of the clauses that I had upon myself were that the sweets that are served under this theme should not be Burfis or Ladoos. Though I had mentioned only those that are served chilled, there are quite a number of Indian Sweets that are gooey, served best as hot. Also as a combo like Gulab Jamun with Ice Cream, Jalebi with Ice Cream/ Rabri, Carrot Halwa and Ice Cream.

For day 1, I have a traditional sweet from Hyderabad, called the Double Ka Meetha. It's made with sweet bread and is not Bread Halwa! Both the dishes are prepared quite differently, even though you might be using the same ingredients. I had recently eaten this couple of times in the past few months. First in Hyderabad, where the Double Ka Meetha was so sinful and even though one can't eat more than one piece, I went ahead and had the second one, because I wanted to memorize the taste to mind. I knew I wanted to recreate the magic myself. The second occasion was at my cousin's marriage. Though it was called double Ka Meetha, it looked and tasted more like Bread Halwa.
So I decided I would stick to the first one and went ahead making it. This is a typically baked version and I served it both as hot and chilled. Everybody loved it so much. In fact, they were asking for it again and I had to confess everything got over. Konda was so upset that she didn't get to eat it again. So was Hubby dear. I simply told them that if I had to keep repeating the same dish, when will I get a chance to cook other posts for BM..:)
They were smart enough not to ask if BM posts were important or their preferences as they ended up loving all the dishes I cook.
Now for this delicious Double Ka Meetha, it gets its name because bread is used and bread was called as double Roti. I would say it can also be that twice the dose of sweet is used in this!

Double Ka Meetha | How to make Double Ka Meetha Hyderabadi Style
Ingredients Needed:
Sweet Bread - 8 - 10 slices
Ghee - 2 - 3 tbsp
Condensed Milk - 3/4 tin
Milk - 1 cup
Roasted Nuts - Cashews, Almonds, Pistas
For the Sugar Syrup / Chasni
Sugar - 1/2 cup
Water - 1 cup
Green Cardamon - 1
Saffron - few strands
Rose Water few drops
How to make Double Ka Meetha
Heat a nonstick pan with ghee, roast chopped nuts and keep it aside.
Trim the bread sides, add it to the nonstick pan, roast well. If you are fine with a deep fried version, you can add more ghee. Here I did pan fried method. Once the bread becomes crispy, transfer to a baking bowl.
For the Sugar Syrup
Add water and sugar in a pan, bring to boil and make a syrup. It's enough if the syrup becomes little thick, we need not worry about thread consistency.
Add slit green cardamon and cover with lid. Once it becomes little cooled, add rose water.
Bring Milk to boil, switch off, add saffron and keep it covered for the saffron to infuse itself.
For the Pudding
When you are ready to bake the pudding, pour the sugar over the roasted bread and bake in a preheated oven at 120 C for 10 mins.
Once done, check if the roasted bread slices have absorbed the sugar syrup and have become sticky. Then pour the milk and condensed milk over it and again bake for another 5 - 7 mins.
Finally, check if the pudding is done, it is done when there is no milk is left out and the bread has absorbed all the liquid.
Garnish with roasted nuts and bake for another 2 mins.
Serve hot or chilled. 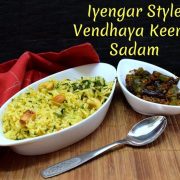 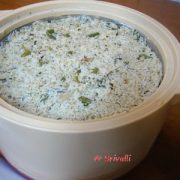