Mumbai Style Kanda Bhajji Pav is a Pav stuffed with hot spicy onion bajji. It has green chutney and garlic chutney applied on both sides. This Pav Sandwich is one of the popular Mumbai Steet Foods. When I planned for the Thali Mela, I picked up the Street Food theme for a week. Obviously, I couldn't miss featuring the famous Mumbai Street Food.

I had a long list of dishes planned for the Thali. However, I ended up making different Pav Dishes that are popular on the streets of Mumbai. I made Pav Bhaji with a different bhaji, Cheese Pav Bhaji, Cheesy Masala Pav, and Pav Pattice. The highlight is the Lahsun ki chutney, so very spicy and versatile.

When Vaishali had made her version of Kaanda Bhajjia for Mega BM, I had bookmarked it and ever since wanted to make it. Since my original plan of making few more dishes didn't work out, I decided I would make this Kanda Bhaji Pav.

We love Onion Bajji and having it sandwiched in a pav is heavenly! Monsoon means Bajiis or Pakoras and Onion Pakora is the easiest one you can make. Kanda is an Onion in Marathi. Same as the rest of the Indian States, Kanda Bhajias are popular in Maharashtra as well.

Onion Bajji Pav as part of the Mumbai Street Food

When I quickly added this dish to be included in my platter on Mumbai Street Food, I was so excited. I love Onion Pakoda and eating it in different forms makes it so delicious. the Lasun Chutney lived up to its name by being spicy and so garlicky! The garlic chutney can be stored for over many months and yet it was so good.

I am going to be sharing three different street food from different cities this week. So stay tuned!

Other Street Foods you can make

PIN This for Later

Make the batter with the ingredients needed to make crispy kanda Bajji.

Place the fried onion bajji on the garlic smeared slice.

Place the other slice and press well and serve.

As we are going to stuff the bajjis, you can fry these as flat thin slices. For this, you can spread the mixture on your fingers as you would do with vada making. Deep fry it.
Else you can make a big chunk of the batter and then press it down.

We can make regular onion bajjis as well. Or by adding the spice powders, that add more flavour. 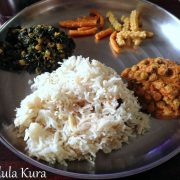